Snow again! I will not bore you with even more tales of woe regarding the winter pummeling we are taking here in New England because I don’t want to get monotonous and I do want to get in the Spring state of mind. It may not actually come til late May, but I will keep my eyes on the prize. We are getting little tastes of warmer days to come, as if Mother Nature was saying “No, no-put down that pill bottle! Don’t kick out the chair. The bleak winter will end soon!” Of course, we all know Mother Nature does like a laugh…

We have enjoyed a day or two here and there when the temp got into the 50’s (!) That’s when these happened:

‘Oh! Is it time for us to sprout? Thank goodness, we have been waiting forever! Wait-this isn’t Spring. Oh no!….”

*Warning! The next picture is NSFPWWF ( Not Safe for People With White Furniture)!*

In the Spring a walk outside becomes an ordeal because upon our return we must scrub off the undercarriage. X2 dogs-(Sugar won’t allow her picture to be taken when she is untidy)

But speaking of sunshine, the beautiful Tabitha at Bourbon & Pearls, the one and only, nominated me for the Sunshine Award. As a recipient I am to reveal a list of 11 tidbits about myself. I was so excited that I made an acceptance speech to the pooches. But then I realized that I would have to reveal a list of 11 tidbits about myself. This is not the sort of thing I do easily, because I am a bad liar and a list full of taradiddles would be far more entertaining. But everyone else has been honest so I will be too.

1. I have no practical knowledge of the words qualitative and quantitative. Oh sure, I know what they mean,  but I cannot use them in conversation because I draw a blank. Many years ago they were stored in some now defunct part of my brain and try as I might to release them, they are stuck. I will go through life without them.

2. I want to marry into an aristocratic family. I know, it’s hard when you are already married. I don’t want to align myself with the Windsors or anything but a family with a title, a coat of arms, a large ancestral home, a house in the city. I am not bothered with the husband-marry the first time for love, the second for money I say. Is the Laird of Glenbogle still single?

break-Im not so sure this was a good idea. After only two entrys I have portrayed myself as both stupid and shallow. But in the true, hearty spirit of my ancestors, I will press on.

3. Every Friday night I make homemade pizza. My favorite so far is butternut squash, caramelized onions, ricotta and bacon. I also made one with dollops of mashed potato with cheddar cheese and bacon that was tasty. I make the dough half whole wheat, it still looks white but it is a bit heartier. 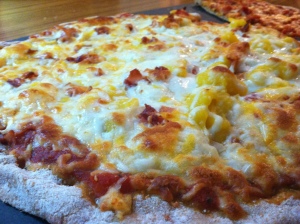 4. I have no thyroid gland. It was causing trouble- it thought it would take over the show so I had to take a hit out on it. I had to swallow a pill of radioactive iodine which necessitated a short vaca  while the heat died down. In other words I had to stay at our cottage for a few days all by myself because I couldn’t be around people due to the radioactivity. Weird, no? Now I have to take a pill every morning to compensate for the distinct lack of thyroid.

5. I am not a vegan but it is easier to say than “I eat high-nutrient, plant based foods every day but two or three times a month I will eat delicious steak and I do have milk in my morning coffee”. And if you read this blog you are familiar with my carnivorous dalliances

6. When I was about 23 or so I joined the navy. But before I could start they told me the navy MD heard a heart murmur on my physical so they rejected me. Maybe my heart was quivering at the idea of joining the navy…

7. Before I was married, I was a paramedic. Created to be a prehospital extension of the emergency physician, most people think of them as ambulance drivers. People would say “oh, you drove an ambulance?” to which I would reply “Not if anyone was sick”. I am particularly adept at starting an IV in difficult circumstances and had an affinity for cardiology. It was a hard and sometimes dangerous job and has never been accurately portrayed on film which is always irritating. You know all those things that an ER doctor yells on tv when a patient is rolled in? Well in real life they have already been done, sans yelling, in the back of a moving ambulance, or while kneeling on broken glass on the side of the highway. Suck it, House.

break again-I doubt I have redeemed myself. Now I am coming off as a man. If you could see me you know that is indeed, not the case. Let’s see if I can turn this around:

8. Here comes the crazy: I hate showers. Oh, I will take them of course because I am a very germ-adverse neatnick. But bathtubs, drains, shower walls,- I cant stand having any contact with any of them. Dont even like to look at ’em. I will never use someone else’s and I cannot use a hotel shower without a shot of whiskey and flip flops. When we moved in I had the entire bathroom torn out and replaced. I scrub the shower at least once a week and you will never see me sit in a tub. I can’t even look at a hottub, its just a big vat of human soup.

9. I don’t eat fish. Nothing that swam in, crawled around, or undulated through the ocean . Strange for a New Englander, I know. But to me they are all just bugs that swim. And who was the first person to look at a lobster and say ‘yum’. Can’t even stand the smell of seafood.

10. I can recite the entire Preamble to the Constitution. Thank you, Schoollhouse Rock

11. I went to college in Texas and loved it there so much that I was branded: I have a little tattoo of texas on my…….actually never mind. That’s 11, right?